In the Union Budget 2022, Finance Minister – Nirmala Sitharaman announced certain provisions and amendments in the rates of indirect taxes – GST, Customs, Excise. We have categorised sector wise and tabulated the same for your convenience below:

Social Welfare Surcharge on Goods Classified Under The Following Chapters Will Be Exempted From 02.02.2022

The list of changes in Customs is exhaustive, therefore, readers are encouraged to mail or call Incorp Advisory for specific queries in Customs.

At InCorp, our team has extensive expertise and experience that can assist you in complying with GST requirements and other indirect taxes. We assist in managing your taxes efficiently.

Stay compliant with all GST regulations!

The Finance Minister (FM) presented the Union Budget of 2022 with a focus on – PM Gati Shakti plan, productivity enhancement, financing investments, and climate action. We have compiled the key points highlighting the tax and policy updates.

The government has announced the following provisions in the Union Budget 2022:

The Finance Minister proposed the below Tax Incentives to International Financial Services Centre (IFSC) in the Union Budget 2022:
Other amendments to Foreign Income:

With respect to GST, Customs Duty and Excise Duty the provisions announced in the Union Budget 2022 can be categorized as follows:

Rate changes in Customs and Excise

Withdrawal of exemptions or concessional rates and levy of additional rates:

Entrepreneurs in India slowly but steadily recognise the importance of intellectual property. This article discusses intellectual properties such as copyright, patents, and trademarks, as well as how they can help you protect your entrepreneurial ideas. Continue reading to find out which of the three options best suits your company’s needs.

What is Intellectual Property?

What are Intellectual Property Rights (IPR)?

Intellectual Property Rights (IPRs) are legal rights that allow you to safeguard your intellectual inventions. These rights aid in the development of your company’s brand.

What is a Trademark, and what are its advantages?

A trademark is any word, symbol, or logo that helps consumers distinguish a product from its competitors. Trademark registration is an essential part of your company’s branding since they keep it distinct and distinctive. The exclusive right to use, sell, and alter your brand or goods in any way is granted by trademark registration.

Trademark registration is necessary since it aids in the development of your company’s brand image. Trademarks in India are divided into 45 different types or divisions. For example, a class could be footwear, metal export, or face cream manufacture. Your trademark can be registered in any of the above-mentioned classes.

Advantages of owning your Trademark:

The registered trademark informs the consumer/customer and any third parties that the product(s) or service(s) delivered under that brand belongs to the trademark applicant.

A registered trademark allows you to use, promote, and market the goodwill associated with the mark. It also aids in the avoidance of trademark infringement and the retention of your client’s loyalty.

Related read: Everything You Need To Know About The Trademark Registration Process In India

What is a Patent, and what are its advantages?

The purpose of a patent is to gain a competitive advantage. A patent gives you the exclusive right to create, use, trade, or import what you’ve invented after it’s been granted. The patent owner is the sole owner of the rights to sell or utilise the patent.

Patents are particularly significant in the industrial and pharmaceutical industries. The creator/company is the exclusive owner of the right to use the process with a patent in place.

Advantages of obtaining your Patent:

You can choose who may and who may not use the patented invention for the length of the patent’s protection.

Patent protection, bans anyone from commercialising, manufacturing, distributing, importing, or selling your invention without your permission.

What is Copyright, and what are its advantages?

Copyright corresponds to the exclusive right to produce, reproduce, promote, and sell your original work. Musical, literary, artistic, architectural, or theatrical works make up the majority of these pieces.

Advantages of acquiring your Copyright:

Anyone with similar business interests cannot copy or use your brand. Someone with a different commercial interest, on the other hand, could copy or use it.

Only the creator or whoever has registered copyright has the right to sell/copy or use a part of the work for any reason.

Protection is granted for 60 years from the year in which your work is made available to the public (e.g. cinematograph films and photographs)

What is the difference between a Trademark vs. Patent vs. Copyright?

Thousands of business ideas pass through our heads every day, and a few of them may be exceptional or noteworthy. Your idea may or may not be protected by intellectual property law. However, your final creation with that exceptional idea could be protected under Intellectual property laws. Copyrights, patents, and trademarks can all be used to protect or preserve your work. They safeguard you (goods and service providers) by allowing you to control how your products/designs are used.

That’s where our knowledgeable team of experts with years of experience can assist you.

Protect What Is Rightfully Yours

Any business that wants to succeed in today’s competitive market must-have brand recognition and value. Trademarks are the most straightforward way for you to accomplish this. The Trademarks Act protects registered trademarks in India and specifies the rules for trademark registration and penalties for infringement.

The Trademarks Act establishes the laws governing trademark registration, protection, and penalties for infringement in India. Trademarks are treated as intellectual property all around the world.

Trademark  or brand infringement occurs when a third party has not been granted permission to use the intellectual property, specifically a trademark of a company/business related to the service or product that the company provides. This may confuse the general public when purchasing that service or product.

When investigating trademark infringement in an offline business or an online marketplace, it’s important to understand that there are two categories of infringement:

It is best to hire professional business services to ensure protection against such futuristic compliance issues. Make sure to have a trademark search before you unknowingly use some other brand’s intellectual property. Using identical or similar marks, knowingly or unknowingly, will be considered as Trademark Infringement..

Our expert team of professionals have the expertise and skills to guide you in any way possible, from protecting your brand to registering your Trademark. Whether you are the plaintiff or the defendant, Incorp can assist you with legal advice in the following:

Know more on How to Avoid Trademark Infringement

Industries and businesses, especially MSMEs, were severely hit due to the outbreak of COVID-19. The pandemic forced several MSME businesses to shut down while the others continued to struggle with liquidity and access to loans. To provide relief to the MSME, the government announced several measures in the Union Budget-2021.

This article will brief you about the MSME schemes that the government launched, their applicability, benefits as well as the reforms it introduces.

*Investment – The original value (Purchase Price) of Plant and Machinery or Equipment is to be considered while calculating the amount of Investment.

Each kind of business element is qualified to acquire the Udyam registration certificate. 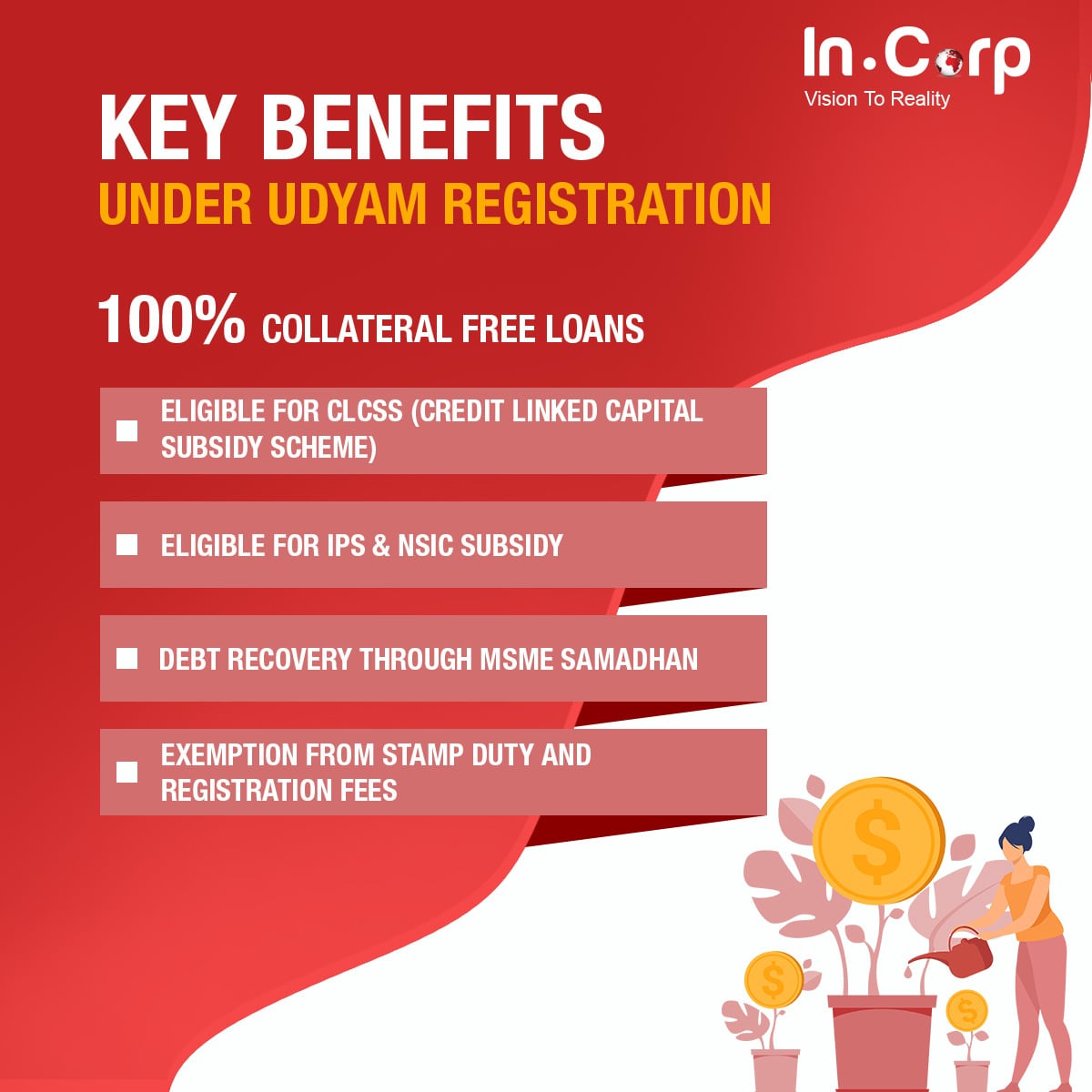 To support the economy and MSMEs that were severely affected due to the outbreak of
COVID-19:

The above-mentioned MSME schemes will help the sector to revive from the impact of COVID-19 and help to create employment opportunities. Efforts have been made to revive small businesses.

The focus has been given on operation reforms in MSME which will increase the confidence in MSME players such as:

Furthermore, the Government wants to focus on helping Covid-hit MSMEs through the MSME loan scheme. It helps by allocating The Emergency Credit Line Guarantee Scheme, which provides 100% guarantee coverage of up to Rs 3 lakh crore to eligible MSMEs, while the allocation for Interest Subvention Scheme for Incremental Credit to MSMEs is at Rs 199.66 crore this year.

Through some amazing reforms, the economy has an opportunity for the economy to grow sustainably. A lot of measures have been introduced to reduce the compliance burden on MSMEs. By way of various incentives to the MSME structure, the government aims to boost the local business and generate employment opportunities.

Incorp can help you with navigating MSME registration and regulations. Our team will guide you and ensure peace of mind from setting up your India company to staying compliant and managing your taxes on time with ease.