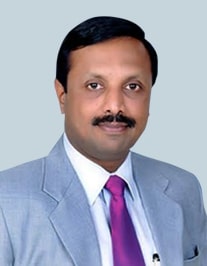 Apart from being an LLB, CA, and an Insolvency Professional, Mr. Vinay Mruthyunjaya is a Nadaprabhu Kempegowda Awardee for his prestigious contribution to the fields of social service and sports for the district of Karnataka. Being in the industry for almost three decades, Mr. Vinay has been instrumental in executing a multitude of renowned leading roles in the consultancy profession across the fields of advisory, regulatory applications, and taxation. He specializes in the areas of Management Consultancy Operations and Project Finance execution.

He was a member of the International Affairs Committee of ICAI, New Delhi contributing his expertise on varied aspects of international matters of the accounting body. He was also a member of the Finance Committee of BCCI, Mumbai. He held a position as a Treasurer for the regional council of SIRC, ICAI Chennai along with being the Chairman of the Bangalore branch of ICAI, Bengaluru.

He is currently the Treasurer of the Karnataka State Cricket Association and also nominated on the academic council of St Joseph’s College of Commerce. Talking about academic contributions, he has authored a book on “Preparation of Project Reports and Documentation for Short-term and Long-term Finances” which was published by the Karnataka State Chartered Accountants Association and was released by Dr. Manmohan Singh – Former Prime Minister of India.